We have worked on a number of questions in evolution and genetics, mostly related to species interactions and plant-microbe interactions using a number of very cool plant, bacterial, and fungal systems.

See my Google Scholar page for citation details and links, and feel free to contact me directly for PDFs you cannot access.

Here are some of the things we’ve studied and teasers of what we’re working on finishing right now:

Genotype-by-environment (G x E) interactions are critical for understanding the evolution of mutualism, and species interactions more generally. I have a long-standing interest in how the environment shapes symbiosis evolution, and the lab has now tackled this from multiple angles. Previous work has focused on how key environmental variables such as nitrogen, herbivory, and carbon (light) availability alters the exchange of fitness benefits and the partner quality of different mutualist genotypes (Heath et al. 2010; Heath & McGhee 2012; Heath & Lau 2011; Grillo et al. 2016; Heath et al., 2020). Most recently, using GWAS and systems biology approaches, we are finding that G x E is a strong force shaping the expression of genes in rhizobia that contribute to partner quality variation – i.e., the genes that determine this quantitative trait depend on the environment (Lindgren et al., in prep).

Functional genotype-by-genotype (G x G) interactions in species interactions occur when the phenotypic effects of one partner’s genotype depend on the genotype in the other interacting partner. These genetic effects are also called intergenomic epistasis and are exceptionally important because G x G for fitness is the driving force between coevolution. They are also extremely common in the shared extended phenotypes that arise when organisms come together in symbiosis (like the nodule, its metabolism, which ultimately affects the fitness of both plants and rhizobia!). So we really cannot hope to understand symbiosis evolution without addressing the underlying genetic interactions between partners and how they percolate up through transcriptomic and metabolic networks to affect symbiotic phenotypes. For these reasons, we have spent a lot of time thinking about G x G variation at the phenotypic, transcriptomic, genomic, and theoretical levels. Rhizobium effects on plant growth and fitness, and conversely plant effects on rhizobium nodulation and fitness, are determined by the interactions of genes in both partners (Heath 2010; Heath et al. 2010; Heath et al. 2012). One thing we have observed, but are still studying, is that these types of G x G interactions can be underlain by major regulatory shifts, i.e., shifts in expression of the three elements of the tripartite rhizobium genomes (Heath et al. 2012), with totally different genetic loci controlling rhizobium partner quality in one plant genotype versus another (Lindgren et al. in prep).

Using a hierarchical, spatially-structured sample of both host plants and rhizobium strains from the native range of Medicago and Ensifer, we are using population genomics to better understand coevolution in these partners and contextualize the maintenance of coevolutionary genetic variation (see Heath & Stinchcombe 2014 for a review). The key symbiosis gene DMI1 is a likely target of geographically-variable selection in Medicago truncatula, in addition to others, and might be associated with partner choice or other aspects of plant-rhizobium interactions (Grillo et al. 2016). Populations of Ensifer bacteria have less spatial genetic structure than their host plants overall, but the population structure of at least part of the large, tripartite genome of these bacteria is correlated with their host – possibly facilitating local coadaptation in at least part of the range (Riley et al. in prep).

Multi-player evolutionary effects abound in the legume-rhizobium-AMF symbiosis (and other multi-player interactions), including indirect selection and facilitation in the field. BUT even though rhizobia have co-opted the genetic pathways of the AMF-plant symbiosis, resulting in a lot of shared pleiotropic genes, these symbioses can probably evolve independently!(Heath & McGhee 2012; Ossler et al. 2015; Ossler and Heath 2018)

Refugial populations in Clearwater refugium in northern Idaho during the last glacial maximum likely did not contribute much to the modern species distributions of mountain hemlock or western redcedar, though there was likely a redcedar refugium there. Instead these species have migrated inland, likely via multiple independent dispersal routes. (Fernandez et al., bioRxiv)

Mutualisms (mutually-beneficial species interactions) are everywhere! The swapping of resources between species is a fundamental force in biology, but one that most people don’t fully appreciate. Your gut microbes help you digest your food, and in return they get to eat some of it and have a cozy place to hang out. The mitochondria that power our cells are the evolutionary result of a very, very ancient symbiosis. The reason soybeans and beans are good for you, especially if you’re a vegetarian, is because these plants form special associations with nitrogen-fixing rhizobia, which provide their host plants with lots of nitrogen to enrich their seeds with protein.

Despite the importance of mutualisms to natural ecosystems, agriculture, and human health, their evolution is not well-understood. How do mutualisms arise in the first place? What evolutionary forces are important in ongoing mutualism coevolution? Over deeper timescales, what generates phylogenetic diversity in mutualisms? These are very big and unresolved questions in mutualism evolution. Currently my group is using a wide variety of methods to address questions about contemporary coevolution in mutualisms using legume-rhizobium interactions as our study system. We tend to use genetic models because they are tractable in the lab and we can effectively merge ecologically-relevant (fitness-related) traits with genomic data to understand the mechanistic basis of coevolution. 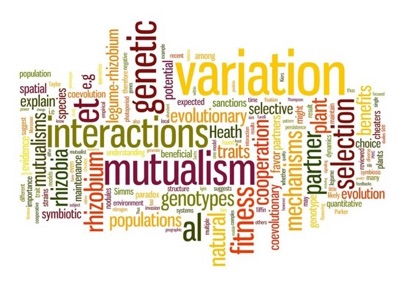