David J. Shapiro was recently named as the inaugural Eugene E. Howe Scholar in Biochemistry. This scholar position is supported by a generous estate gift to the Department of Biochemistry from the late Eugene Howe.  The selection and naming process originated from a formal discussion that included all senior faculty in Biochemistry who currently hold a chair, professorship, or scholar position and involved consideration of significant and long-term sustained contributions toward all three missions of the University of Illinois:  research, teaching, and service.  Naming of Dr. Shapiro as the Eugene Howe Scholar in Biochemistry was reviewed and endorsed by the LAS Executive Committee and Executive Associate Dean of LAS.

On April 15th, 2016, in recognition of this honor, Dr. Shapiro gave a seminar entitled: "Targeting MDR1 and CRISPR-generated Therapy-resistant Cancer Through Estrogen Receptor." Dr. Shapiro's career and acheivements were introduced by MCB faculty, some of whom are Shapiro lab alumni, and was well attended by faculty and students from numerous departments. 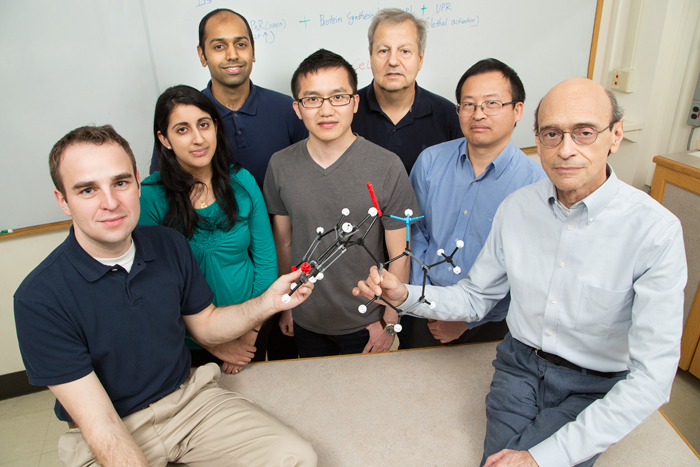 CHAMPAIGN, Ill. — An experimental drug rapidly shrinks most tumors in a mouse model of human breast cancer, researchers report in the Proceedings of the National Academy of Sciences. When mice were treated with the experimental drug, BHPI, “the tumors immediately stopped growing and began shrinking rapidly,” said University of Illinois biochemistry professor and senior author David Shapiro. “In just 10 days, 48 out of the 52 tumors stopped growing, and most shrank 30 to 50 percent.”

The key to the drug’s potency lies in its unusual mode of action, Shapiro said.

“BHPI works through the estrogen receptor protein, but in a way that is different than estrogenic hormones,” he said. “The drug hyperactivates a pathway called the unfolded protein response, which estrogens normally use to protect cells from stress and help them grow.”

Rather than blocking the stress response, BHPI kicks the UPR into overdrive, said M.D./Ph.D. student and lead author Neal Andruska.

“This drives the cancer cells from using the UPR in a protective way into making it a lethal pathway,” Andruska said. “In this way, it stops growth and eventually kills many types of breast, ovarian and endometrial cancer cells that contain estrogen receptor.”

BHPI shuts down the production of new proteins, including proteins that normally keep the stress response pathway in check, Andruska said.

“Eventually, many cancer cells die – in part because they can’t make any new proteins,” he said.

BHPI spurs a number of events in the cell, including the opening of calcium channels in the endoplasmic reticulum, a special intracellular compartment. The influx of calcium into the cytoplasm sets off a cascade of events that prepare the cell to deal with stress. The cells try to pump the calcium back into its compartment, but BHPI keeps the calcium channels open, allowing the calcium to flow back into the cytoplasm. After about 30 minutes of this “futile cycle,” the cells run low on energy. (Watch a movie of cancer cells responding to estrogen and BHPI.)

“Without enough energy, cancer cells don’t grow,” Shapiro said. The cascade initiated by BHPI eventually turns on four pathways, “each of which could potentially contribute to the death of the cancer cells,” he said.

Because the UPR pathway is overexpressed in therapy-resistant cancer cells, the drug is especially effective in targeting estrogen receptor-positive cells that are resistant to tamoxifen and other anti-cancer drugs, the researchers report.

“BHPI works equally well in the presence or absence of estrogen,” Shapiro said.

The mice that received the drug tolerated it well, with no weight loss or other negative side effects, the researchers said.

“It’s still in the early days for this drug, and there are many hurdles to overcome to bring BHPI to the clinic,” Shapiro said. “But so far, it’s been clearing the hurdles by a wide margin.” 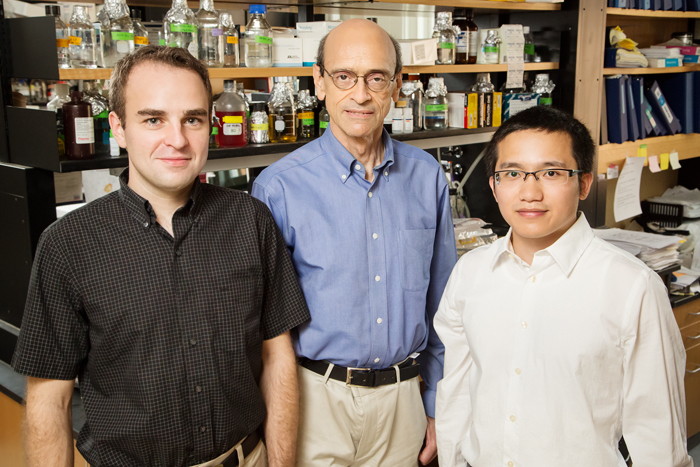 CHAMPAIGN, Ill. — Scientists have discovered a previously unknown mechanism by which estrogen prepares cells to divide, grow and, in the case of estrogen-positive breast cancers, resist cancer drugs. The researchers say the work reveals new targets for breast cancer therapy and will help doctors predict which patients need the most aggressive treatment.

The University of Illinois team reports its findings in the journal Oncogene.

Estrogen pre-activates the unfolded-protein response (UPR), a pathway that normally protects cells from stress, the researchers report. The UPR spurs the production of molecular chaperones that prepare cells to divide and grow. Without chaperone proteins to do the work of folding and packaging other proteins, cells – including cancer cells – cannot divide. For this reason, chaperones are a popular target for new cancer therapies.

Activation of the UPR is known as a normal response to stress – when a cell lacks adequate oxygen or nutrients, for example, or is exposed to cancer-killing drugs. UPR activation prepares the cell for major changes associated with cell growth, division and survival under stress.

It wasn’t known before this study, however, that estrogen initiates this pathway before such stresses appear, said University of Illinois biochemistry professor David Shapiro, who led the new analysis with lead author, M.D.-Ph.D.-student Neal Andruska.

“This is a new role for estrogen in the pathology of cancer,” Shapiro said. “Others have shown that stress activates this pathway, helping to protect some tumors. What is new is our finding that estrogen can pre-activate this pathway to protect tumors.”

When estrogen binds to its receptor it sparks a cascade of molecular events in the cell. A key event occurs when a channel opens in the membrane of a compartment that stockpiles calcium, and calcium floods into the cell.

“That’s a signal to activate the UPR pathway, the stress pathway,” Shapiro said. “It’s also a signal that many researchers think has something to do with cell proliferation. The calcium itself may be a proliferation signal.”

The stress-response pathway induces the production of chaperone proteins.

“I like to think of this pathway as an assembly line,” Shapiro said. “In order for cells to divide, you’re going to have to produce a lot more proteins. The chaperones help you to package, fold up and ship all these proteins.”

The UPR also is a mediator of cell death. If a normal cell is exposed to too much stress, the stress response spurs apoptosis, a kind of cellular suicide. In cancer, however, mild activation of the UPR by estrogen blunts this cell-death pathway, allowing cancer cells to survive and even resist drugs, the researchers found.

The team also looked at the expression of UPR-related genes in publicly available data from samples of breast tumors obtained from women who had been diagnosed up to 15 years prior.

“Andruska, who spearheaded the research and carried out the computer analysis of the breast cancer data, found that UPR activation is a very powerful prognostic marker of the course of a woman’s disease,” Shapiro said.

The analysis revealed that among women with estrogen-receptor-positive breast cancer who underwent tamoxifen therapy, breast cancer was 3.7 times more likely to recur in those overexpressing the UPR. Ten years after a breast cancer diagnosis, only 15 percent of those with the highest level of UPR-gene expression were disease-free, compared with 80 percent of women with minimal UPR expression.

“Our marker helps identify breast cancers that are likely to be highly aggressive and therefore require intensive therapy,” Shapiro said.